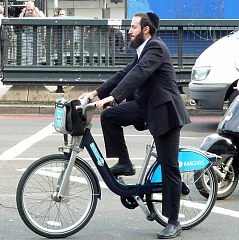 London's public cycle hire scheme will allow users to hire a bike for short journeys around the capital.

£140 million cycle hire scheme was launched on July 30, 2010. More than 11,000 journeys were made using hired bikes during the first two days of the Cycle Hire London scheme. After a month after the launch there are 5,000 bikes parked at 335 "docking stations" spread every 300 metres or so across central London.

Not to forget the £300 deposit. That deposit is to insure you in case should the cycle be stolen when you pop into the shop for an icecream. Cos you have agreed not to lock or secure the Cycle to any object or property during the Period of Use. 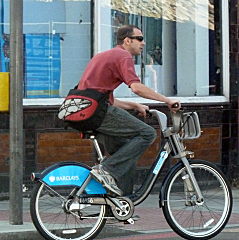 In Paris that has similar cycle hire scheme, 3,000 bikes are stolen and 3,000 bikes vandalised each year. Most thefts are caused by day users because they are not used to how the cycle docking systems works and they leave the bike accidentally unsecured.

When you return your cycle, make sure you get a "green light and click at the end of every trip". If the light doesn't turn green, you will continue to be charged.

About 15% of all cycle hires occur after the Tube shuts down and people want to get home without paying for expensive taxis. It's very, very funny watch people turning out of clubs and trying to work out how to unlock and use Barclay bikes in their merry states.

London Cycle Hire scheme (LCHS) is designed built and operated by Serco Group plc (Serco) in conjunction with BIXI. The contract was on 6,000 bicycles for hire in Central London and 400 docking stations offering over 10,000 docking points. 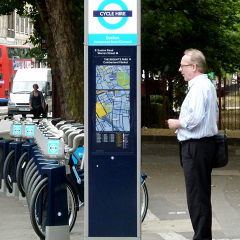 The bicycles, each costing around £350, and the docking stations for London cycle hire are built by DeVinci in Montreal, Canada.

Sure, London wouldn't have this new bike hire without the rumoured £25m that Barclays has paid to sponsor the system. As a sponsor Barclays got strong branding on and around the bicycles, and even stronger foot into the door with the London Mayor office. The public name of the service is Barclays Cycle Hire. Play the game well, and you can really benefit.

Councils have turned down permissions for 76 docking stations after protests from residents. Residents claimed that the bikes would be positioned under a tree and would be covered with bird-droppings, that it would be a violation their human rights if a docking station were to built outside of their mansion block in Bloomsbury, that cycles would be used by drunken revellers indulging in horseplay, and at last - anybody wanting to cycle will already own a bike. One docking station refused by Westminster council was planned to Boris Johnson's street in Islington. 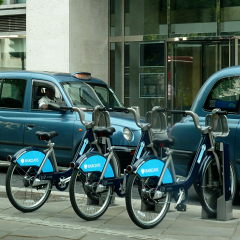 Cycles for rent on Cannon Street.

A web designer who raised £21,280 for breast cancer research by riding a Boris bike from Newcastle to London arrived home to find his cycle hire account frozen.

Tarek Nseir, 29, who rode with 12 colleagues from Clerkenwell design agency Th_nk, said the 23kg, three-gear bike would not go up many steep hills. "It was like cycling a sofa," he said. The bike did not suffer any mechanical faults on the trip, but Mr Nseir's account was frozen by scheme contractor Serco and he faces a £300 charge for taking it for six days.

Only quarter of the cycle hire scheme's 92,000 registered users are women as of November 2010.

Women are shunning Boris Bikes because they are afraid of London's traffic and they have nowhere to change after they get hot and sweaty riding them.

A TFL spokesman said: "Our Cycle Safety Strategy initiatives include signing a memorandum of understanding with the Freight Transport Association to get lorry drivers and cyclists sharing the road safely."

Do not stunt ride those two-wheeled iron horses!

Tags: cycle, hire, docking, bike, scheme, bikes. All photographs that appear on this webpage are copyright of London Where and London Where claims a credit for them.