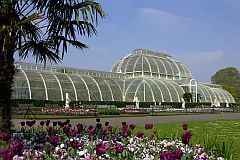 More than twelve percent of the world's known plant species can be found on the manicured grounds of the Kew Gardens. Add 300 acres, 250 years of British history, nearly two million visitors annually, and greenhouses that resemble glass castles. A staff of 800, mostly plant specialists and scientists work at Kew Gardens in London.

Royal Botanic Gardens lie between Richmond and Kew along the south-western reaches of the River Thames in southwest London, and are part of a picturesque series of parks, estates and urban centres. Kew Gardens illustrate signiﬁcant periods in the art of garden design from the 18th to the 20th centuries. They house extensive botanic collections which have been considerably enriched through the centuries.

Julius Caesar is thought to have crossed the Thames at Kew on his first visit to Britain in 53 BC. The first reference to a settlement is in 1313 and by 1483 the hamlet of Kew was of taxable size. In the 16th century, Henry VII built a Palace in the royal hunting park at Richmond, moving his court there for the summer months.

In the 18th century Prince Frederick and Princess Augusta started a garden around Kew Palace, adjacent to the Royal Park. In 1759 William Aiton was recruited from Chelsea Physic Garden to manage the small "Physick Garden" at Kew. This garden grew in size, absorbing in stages land from the Park, and became a place for the Royal Family and a succession of gifted gardeners and scientists to experiment with plants and garden landscaping. In 1761 was built the lofty Chinese pagoda. The Palm House was built between 1844 and 1848. The garden became the centre for study of native and exotic plants for economic purposes with plant researchers bringing back species from around the world. Kew published from 1885 onwards its Index Kewensis, an international reference for listing published generic and species names.

The parkland character of Kew is a combination of botanical garden, arboretum and woodland. Whilst the Garden incorporates a historic layering of styles, the predominant character is Victorian. The combination of corridor vistas and irregular pathways creates a complex lay-out.

The authenticity of Kew Gardens as one of the world’s premier botanic gardens is indisputable. Since its creation in the 18th century it has remained faithful to its initial purpose with botanists from Kew continuing to collect specimens and exchange expertise through numerous global partnerships. The Kew Collections of living and stored material are used by scholars all over the world. 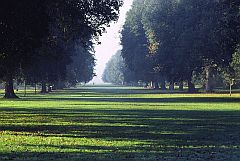 The stunning botanic Kew Gardens contain some of the most beautiful gardens found in London and is great for a relaxing walk in the summer. Kew offers a range of events, including concerts, outdoor sculpture exhibitions and festivals which attract many visitors. There are four cafes and restaurants across the Kew site. You are also allowed to bring your own food to Kew - picnics are allowed anywhere except in the cafes and restaurants, or inside the glasshouses. The best news is children under 17 go free to Kew Gardens.

Kew Gardens currently is the 5th most visited paid attraction within the UK. It takes around three hours to visit the whole 121 hectares of the gardens. The Kew Gardens is about one mile across and it takes about 40 minutes to walk across. Even in the middle of winter the Kew Gardens and the greenhouses hold a splendid display for all tastes.