Sun is switched on full steam, thermometer in weather-station shade tells scientific +33° by Celsius. On the streets of London it feels like being a bit more though. Ice cream in cone smelts faster than money in your wallet. Well balanced BBC Weather Forecast summary cautiosly states: Generally dry with bright or sunny spells for most, although rather misty at times near some southern coasts. Very warm or hot and humid and feeling very close with just light winds. Tonight warm evening sunshine then generally dry and very warm overnight. Misty in places, especially along the coast, and perhaps a few thundery showers around towards morning, especially in the west. On average there are 7 days a year above 30 °C. 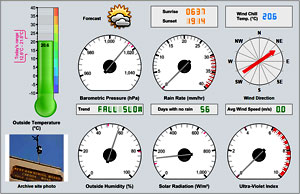 Real time temperature, ultra-violet index, rainfall and evapotranspiration in London can be found on Grid for Learning weather monitoring website. The monitor's display looks like a punk steamer's dashboard. Nonetheless you can choose there many locations around London and UK from drop-down menus. Readings of real time temperature can be arranged into a table or map view. Among many other metrics the weather station reveals the temperature and wind and barometric readings and ultra-violet index updated every minute. The real time weather & temperature site is developed in partnership with Imperial College of London: due to adverse weather conditions staff and students are advised to take extra care when walking outside on the College’s campuses. London Grid for Learning also hosts a real time weather map.

Rest of real time temperature sites fall in the same category with Digital Urban Realtime London Weather - Our weather station has been offline for a while, ironically it failed due to ‘weathering’ and the effects of water on its connections. View the Flash based version, live from our roof, data is updated every 3 seconds.

Weather in London is temperate and oceanic, similar to much of southern Britain. Summers are generally warm and sometimes hot, the heat being boosted by the urban heat island effect making the centre of London at times 5 °C warmer than the suburbs and outskirts. Despite its reputation as being a rainy city, London receives less precipitation in a year than Rome or Bordeaux. Winter is generally cool, wet and windy, snow occurs about 4 or 5 times.